Big Boy No.4014 visiting Omaha, Nebraska. It is steamed up not a static display.

This past August I took a roadtrip to Omaha, Nebraska for the American Philatelic Society’s annual StampShow. While on this trip I took in some interesting railroad history and sites. Omaha is the headquarters of the Union Pacific Railroad.

During the show their recently restored steam engine 4014 “Big Boy” made a stop over. This engine is the largest of its kind. In service from 1941 until the late 1950s it and others in the fleet hauled freight and passengers across the United States. Union Pacific is very proud of its history. They were one of the railroads that met at Promontory, Utah on May 10, 1869 completing the first transcontinental railroad in the Americas.

“Big Boy” is touring all over the Western United States to celebrate the 150th anniversary of the transcontinental railroad.

View of Bailey Yard from the tower. Camera could not capture entire yard

On the way westward from Omaha on my way home I stopped at North Platte situated along the main line of the Union Pacific. There I went to the visitor center which is the Golden Spike Tower. From here you can view and tour the Union Pacific’s Bailey Yard. 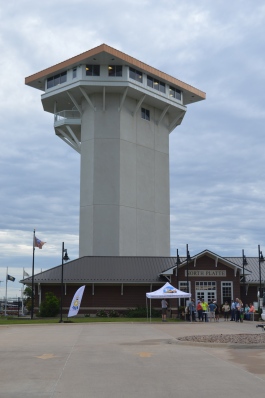 This is the world’s largest railroad classification yard per the Guinness Book of Records, 1995 and still is today. Here they sort, service and repair locomotives and rail cars headed to destinations throughout North American. It is named after a former Union Pacific president, Edd H. Bailey. This yard and its workings are featured on “Freight Trains” an episode of the History Channel’s Modern Marvels. YouTube has these videos available just search “Modern Marvels”.

Bailey Yard is located halfway between Denver and Omaha. It covers 2,850 acres (4.45 sq.mi.)and is over 8 miles in length. The yard has 200 separate tracks totalling 315 miles. Union Pacific employs more than 2,600 people in North Platte. About 140 trains and over 14,000 railroad cars pass through the yard daily. Almost all operations are computer controlled right down to the braking of the cars as they are sent down the east or the west hump to be made up into various trains. Gravity takes over as the cars are pushed down the humps but computer-controlled braking on the track controls their speed and switches them to the appropriate track.

This facility truly is a modern marvel.

This entry was posted on Tuesday, October 22nd, 2019 at 2:48 pm and is filed under Bailey Yard, Big Boy, history, History & Science, locomotive, Nebraska, North Platte, railroad, Union Pacific, united states, usa. You can follow any responses to this entry through the RSS 2.0 feed. You can skip to the end and leave a response. Pinging is currently not allowed.