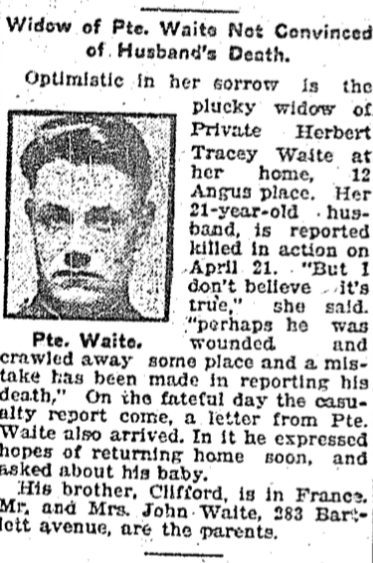 My Great Uncle – article in Toronto paper in 1917.

Vimy Ridge located in France was a strategic high point the Allies wanted to capture to gain an advantage over the Germans. Attempts to capture it had been made on several occasions before without success. The Canadians had gained a name for themselves as tough, never say die soldiers, so they were called in to attempt to capture the objective.

Canadian commanders did the following key things to prepare for the battle,

The attack was planned for 5:30 am on the morning of April 9th. Several hours before all the men were given a hot meal and a tot of rum.

The attack began on schedule at 5:30 am behind a creeping artillery barrage. The artillery barrage moved several yards each time and the infantry followed behind. This was a tactic that gave the soldiers some protection as it forced the Germans to keep their heads down and caused confusion in their ranks. The first wave went forward through the underground tunnels to catch the Germans by surprise. Some of these caves and tunnels were large enough to hold an entire battalion. Artillery bombardments had been on-going for several days ahead of the attack, this was to confuse the enemy and keep them guessing as to when the actual attack was coming.

Within the first hour the 1st, 2nd and 3rd Divisions reached the first objective and by 8 am the final objective. The battle continued for two days with another two for mopping up. Victory was declared April 10th. The Canadians accomplished what no other troops had been able to. The cost was high with Canadians suffering 10,600 casualties including 3,598 killed. Over 4,000 Germans were captured during the battle.

This battle is personal for me because members of my family took part. As a genealogical researcher I spent a lot of time looking into our military history. I discovered connections to Vimy Ridge and other battles of World War I.

Cuthbert “Bert” Sendell:
My grandfather on mother’s side served in the Canadian Army Service Corps (CASC) and was at Vimy Ridge. He survived and came home. Interestingly he enlisted as Herbert Strain, his biological father’s first name and his stepfather’s last name.

Herbert Tracy Waite:
Grandmother’s big brother who unfortunately was killed at Vimy. He was only 20 years of age and left behind a wife and children back home. The newspaper article at top is a document I found during my research. Date of his death was actually April 13, 1917, but reporter didn’t have a lot of information at that time. Very sad reading and this is just one example of thousands. He is commemorated at the Vimy Memorial in France, but is one of thousands whose body was never found.

Vimy Ridge was just an entry in the history books to me, but that history came alive when I discovered my ancestors contributed to Canada’s war effort. This coming April 9th I will be proudly thinking about their sacrifice one hundred years ago.