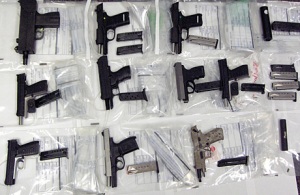 Calgary has seen a epidemic of gun violence this week and over the last few months, yet Canada has some of the most restrictive gun laws in the world so what is happening. It sure isn’t the legitimate gun owners who are the problem.

For a Canadian to possess a gun they must complete a safety course and have a background check. Those with criminal records are not allowed to own guns. Having the proper approvals they must present the documentation at the time of the purchase. Guns can be sold only through licensed dealers and not at flea markets. Even private sales have to meet this criteria. Gun owners are required to notify the police of a transfer of ownership. This applies to rifles and shotguns. Military weapons, machine guns, full automatics and others are completely restricted. Handguns are totally restricted unless a person has a special permit to have one. These are extremely difficult to obtain. Gun owners are also required to keep guns properly stored under lock and key. Ammunition must be stored separately under lock and key.

Well I hate to tell you this but bad guys aren’t going to get permits to have guns. I can see it now. Joe Gangmember getting ready to do a drive-by shooting tells his boss gee I need to get a permit otherwise the hit is off. God forbid I go stick-up that bank without proper permits. Yeah right.

Simple Answer – keep the guns out of the hands of criminals. That`d be a start. Easier said than done, but we have to try. How to do that is a big question, but the police and justice system better start figuring a way. We are reverting to our wild west days and someone is going to get hurt or killed besides the bad guys. You know when it comes right down to it I don’t care if bad guys kill bad guys, that’d be a good thing, but the bullets fly in public places and hurt innocent people. So unless we can get the bad guys to kill each other in a private place away from the public we need a solution.

The bad guys get guns from two main sources. First from break-ins or thefts from homes and businesses where there are firearms. Second from other criminals who smuggle them in from the neighbouring USA where gun laws are much looser. Handguns are easy to obtain in the USA. It is illegal to bring them into Canada, but that is obviously happening and on a large scale. Every once in a while we read of a seizure of guns at the border crossings, but the authorities can`t catch them all. So here`s some suggestions for the police and justice system.

We need answers. Do you have any ideas? I`d love to hear them.

One of many cemeteries in Europe where Canada’s war death lie.

Tom Brokaw’s  famous book, “The Greatest Generation”, is in my opinion one of the best reads on war and sacrifice. It is a collection of stories from veterans and their wartime experiences. It’s not about generals and strategy, but rather about ordinary people and how they stood up and fought for our freedom against the evil forces seeking to destroy and conquer the world. Although American it applies to all who were of that generation. These people grew up in the Depression of the 1930s and did what had to be done in the 1940s. They made it possible for us to have the society we have today. The following quote from the book says it all

“They came of age during the Great Depression and the Second World War and went on to build modern America – men and women whose everyday lives of duty, honor, achievement, and courage gave us the world we have today.”

These men returned from the horrors of war to short-lived celebration and then resumed their lives as best they could. For years they never talked about their experiences. All that changed after fifty years when they realized age was killing them off at a rapid rate. They didn’t want to tell their stories to glamourize war, but so that we would never forget. Over the years I’ve been fortunate enough to know some older vets who told me of their experiences. It is incredible to see a vet tear up when he remembers a buddy from all those years ago. They remember the friends they lost like it was yesterday such was the horror of it. To all the vets who tell the stories thanks for letting us know what it was really like.

To younger people if you want to know about wars don’t read the accounts of generals and politicians, read the stories of ordinary people, the soldiers who went through the mud, the fire, and the blood. For Canadians there is “Testaments of Honour: Personal Histories of Canada’s War Veterans” by Blake Heathcote which I highly recommend.

Other books to read are Stephen Ambrose’s “Citizen Soldiers” or Cornelius Ryan’s “The Longest Day”. These books are far more interesting and enlightening then some general’s memoirs. The movie “Saving Private Ryan” which revolves around the D-Day landings is one of the most realistic war movies of all time. Director Steven Spielberg screened it for veterans of D-Day to get their input. To a man they liked it, but said it lacked one thing, the smell. They told him the smell of blood, gore, death and cordite from shells was overpowering during the combat. They also told him the noise level pierced them to the very soul. These were the things they still remembered all those years later.

When you attend or watch the Remembrance Day ceremonies and you see all the old vets close your eyes and visualize them as young boys and men in their late teens and early twenties preparing to charge off the landing craft into the hellstorm of machine gun fire and shelling. While you’re contemplating that image ask yourself if you could stand up and do what needed to be done.