Bar Stool DUI – What Next?

Police in Newark, Ohio charged Kile Wygle, 28, with driving while drunk. Doesn’t sound unusual, but wait, he was on his bar stool at the time. Turns out he was using his motorized bar stool, which can reach speeds of 38 mph.

Guess he didn’t want to get off his stool. Probably afraid he would fall on his face, so heck why not drive. Stupid is, stupid does. The picture tells the story.

The Day We Almost Lost Ronnie

Reagan Just Before the Shots

March 30, 1981 Ronald Reagan just 70 days into his first term was leaving the Washington Hilton after giving a speech. Outside a young man waited. He was fixated on actress Jodie Foster and was sure what he was about to do would impress her.

John Hinckley, Jr. was only 25 years old and was out to make a name for himself.

The car headed for the White House. Agent Parr noticed Reagan was coughing blood and complaining of a sore rib. He ordered the driver to head for the hospital a mile away. This quick action by the Secret Service agent almost certainly saved Reagan’s life.

There doctors revealed Reagan was bleeding “at a rather alarming rate”, this even though he walked into the hospital. To ease his wife’s fears he joked, “Honey I forgot to duck.”

One of Hinckley’s bullets had ricocheted off the car, struck Reagan’s rib, and entered his lung. The President had gone into shock by the time surgery was started. Doctors found the bullet, which had narrowly missed his heart, and stopped the bleeding. It took them almost three hours of surgery.

The most seriously injured was James Brady who was shot in the head and wasn’t expected to survive. He did survive. Also injured was a Secret Service agent who was shot while wrestling with the would-be assassin Hinckley.

At the time it seemed Reagan wasn’t injured that badly. The public didn’t realize how close a call it was. Think of how history would have been changed if instead of having Ronald Reagan as president for eight years, he served only 70 days. How quickly things can change.

Talk About A Bad Day

Tsutomu Yamaguchi, now 93 years of age, has been certified as the only person to survive both atomic bombs dropped on Japan in the Second World War.

On August 6, 1945 Yamaguchi was in Hiroshima on a business trip. The first atomic bomb was dropped that day. He survived with serious burns. He stayed overnight in the cityand the next day returned to his home in Nagasaki.

Several days later on August 9, 1945 the second atomic bomb was dropped after the Japanese failed to surrender. This bomb was dropped on Yamaguchi\’s home city of Nagasaki. Again he survived.

The government of Japan compensates and provides medical care to certified survivors. His benefits won\’t increase because of his double certification.

And you thought you were having a bad day! 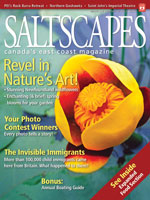 A bit of a brag today. I just had my first feature article published in a mainstream magazine. I’m previously published in hobby magazines, but this is the first non-philatelic article published for me. It’s very satisfying to see one’s hard work in print. I say hard work, but in actuality it was fun for me.

The magazine is Saltscapes, March/April 2009 Issue. This is a lifestyle magazine published in Bedford, Nova Scotia. The photo is of the cover of the current issue. The editor, Heather White, was fantastic to work with. She really believed in the article. The title of the article and it’s description is,

“Like many immigrants, home children came to Canada to bave a better life. They left a legacy, but not necessarily a history. Here is one home child’s story.”

So now it’s back to work on the writing to have more articles published. Thank goodness I seem to have lots of ideas.