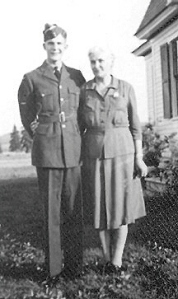 Uncle Ken with my grandmother. Although the youngest he was the tallest at well over 6 feet.

I always think of the young men and women who have given so that we can live in freedom and happiness today.

As a history buff and genealogist I’ve discovered so much to appreciate about these people, especially those who were my relatives.

World War I (The Great War)

My grandfather on my mother’s side served in World War I. He was in the Canadian Army Service Corps (CASC) from 1915 until 1919. He drove ammunition trucks loaded with shells and ammo for the troops from behind the lines to forward positions. Most times he was under shell fire from the enemy who were attempting to stop supplies from reaching the troops in the trenches. He told me one time that many of his friends were killed when the trucks were hit. Although he didn’t talk about the war much but occasionally he would. One of my heroes for sure.

My father with the RCAF in England.

Dad served in the RCAF. He was posted overseas to London, England for several years from 1944 until 1946. Dad told me he served in military intelligence. His group set up phoney airfields around England to fool the Germans. While in London he was subjected to the V-bombs that fell almost daily near the end of the war. He was a newly-wed when he shipped overseas.

Mom served in the RCAF in head office in Ottawa. It was while there she met my Dad and eventually they were married. Because she wasn’t allowed to fraternize with officers she had to resign to marry my father. Ironically after her resignation they hired her back in the exact same position as a civilian.

Glen served in the RCAF mainly on the west coast of Canada keeping watch for enemy subs and such. He survived the war and lived a good and long life.

My father’s youngest brother Ken served in the RCAF and trained in the British Commonwealth Air Training Program. The day before he was to get his wings as a pilot he was killed in a training accident along with his best friend. He was 20 years of age.

Rob served in the Canadian Forces. He was on the frigate HMCS Calgary and based on the west coast of Canada.

Thank you all veterans for your service to my country Canada.