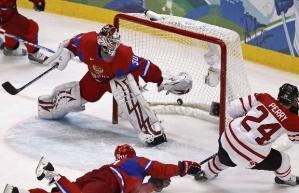 Canada goal on the way in

Hockey in Canada is a religion. Last night one of the heated rivalries Canada vs Russia played out, with Canada winning 7-3 to advance to the semi-finals.

“They came out like gorillas out of a cage,” Russian backup goaltender Ilya Bryzgalov said.

Prior to 1998 pros were not allowed to compete in the Olympics, unless you were Soviet. They fielded a team consisting of their best. The players were all members of the military and paid to train and compete 24/7. This is how they circumvented the rules.

In 1998 the NHL allowed its players to compete for their respective countries. This leveled the playing field and the Russian monopoly on the Gold Medal ended.

The top two teams in Vancouver are Canada and the USA. It appears likely they will meet in the Gold Medal game later this week. The USA defeated Canada in the preliminary round, but lately Canada have found their game and are playing much better. It should be a classic game with all the ingredients for the best game to date. Stay tuned. Go Canada Go. 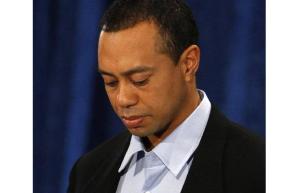 After listening to Tiger’s apology today I made a list of ten things to remember when thinking about playing strange courses.

Good luck Tiger. Keep your balls and club in the bag.

What Does this Make You Think Of? 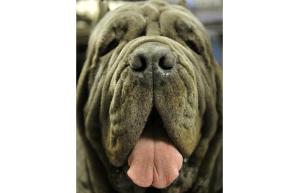 A question for readers this morning. What does the expression on this dog’s face make you think of? What might he be thinking?

Let me hear from you. Leave a comment please. Thanks. 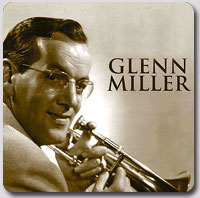 On December 15, 1944 Glenn Miller took off in a light plane from England to entertain troops in France. The weather at the time was atrocious and he was told to wait, but he said the troops needed him. He disappeared somewhere over the English Channel. No trace of him or his plane have ever been found. He was only 40 years old.

Glenn Miller was arguably the greatest Big Band leader of the era. His music was the anthem of the 1940’s. Girls swooned and men cheered his band’s sound. It was like rock and roll today.

During the Second World War he and his band volunteered to travel to the war zone and entertain the troops. They also traveled all over the United States building morale and selling War Bonds.

His story was told in the 1953 movie, “The Glenn Miller Story”, starring James Stewart.

On this day in 1942 he was awarded the first ever Gold Record for selling 1.2 million copies of “Chattanooga Choo Choo”. Other great songs include, “In the Mood”, “Moonlight Serenade”, and “Pennsylvania 6-5000”.

The United States Postal Service issued a stamp in 1996 honoring him. It is shown below. 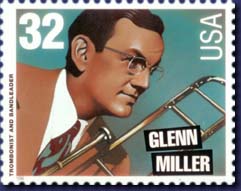