Late April and early May saw a roadtrip to San Francisco to attend Westpex 2019 a national level stamp show held yearly. I use these trips to site-see along the way. I’m always looking for historical sites to take in.

Instead of taking a cross-country shortcut I elected to go south almost to Salt Lake City and go to the Golden Spike National Historic site.

The site is located thirty-two miles west of Brigham City, Utah just north of Salt Lake City. The interpretative center stands next to the original rail line and the actual location of the last spike. There are two exact replica locomotives at the site. They are both operational and depending on the time of year do run outs on the line. When not fired up they are in a shed where they can be viewed. Knowledgeable staff are available both in the main center and the locomotive shed. 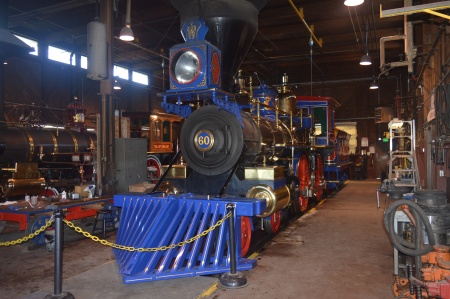 Jupiter in the locomotive shed. To the left is No. 119

The two locomotives are the Central Pacific’s Jupiter and the Union Pacific’s No. 119. Central Pacific laid track from Sacramento, California through the Sierras to arrive at Promontory. Their locomotive the Jupiter is wood burning as is the replica. Union Pacific had track to Council Bluffs, Iowa but no bridge across the Missouri River so they started laying track from Omaha, Nebraska across the river from Council Bluffs and began building a rail bridge at the same time. Until the bride was completed they barged construction supplies across the river. Their locomotive, No. 119 burned coal as does the replica today.

If you’re interested in railroads and their history I highly recommend a visit. It’s a short drive off the Interstates either I-15 or I-84 depending on which direction you are driving from. Details can be found on the National Park website,

According to the website it is open year round 9 am to 5 pm except for major holidays. Locomotive demonstrations are only during the summer months. Unfortunately I was there in late April but did get to see them up close in their shed. Staff were very knowledgeable and helpful. The gift shop had lots of excellent books and souvenirs.

This entry was posted on Monday, October 14th, 2019 at 3:46 pm and is filed under history, History & Science, travel, united states, usa. You can follow any responses to this entry through the RSS 2.0 feed. You can skip to the end and leave a response. Pinging is currently not allowed.