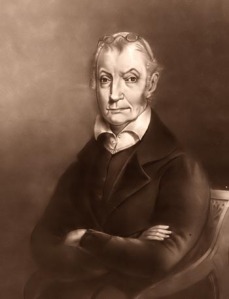 One reader has asked about the results of the faulted selection method for Vice President prior to Amendment XII taking effect for the 1804 election. Before Amendment XII the loser of the presidential election became Vice President. Sometimes this created strange bedfellows as my previous post discussed.

(Left: Aaron Burr, one of the most contentious Vice Presidents – ever.)

Here are the results of the four presidential elections occurring before the amendment (party affiliation in brackets):

1789:
President George Washington (none), Vice President John Adams (none)
Not contentious because after all how could Adams argue that Washington, the Father of His Country, should not be first president of his country.

1792:
President George Washington (none), Vice President John Adams (Federalist)
Adams felt presidents should only serve one term and his also disagreed with Washington’s handling of many issues. A rift developed, but Washington was stuck with Adams.

1800:
President Thomas Jefferson (Democratic-Republican), Vice President Aaron Burr (Democratic-Republican)
In this election both Jefferson and Burr wanted to be president and even though they were of the same political party, they held widely differing views. They ended up tied with 73 Electoral Votes each. This assured both men of at least one of the highest offices of the land. In accordance with the Constitution, the House of Representatives decided the result for the first time in history. After 36 ballots, the House elected Jefferson president and Burr vice president. Burr refused to remove himself from consideration even after pleading from his and Jefferson’s party. This created animosity between Jefferson and Burr. In addition Alexander Hamilton of the Federalist-controlled House advocated Jefferson as the lesser political evil than Burr. Later while Burr was vice president he killed Hamilton in a duel. This destroyed Burr’s career because Hamilton was very popular. Jefferson did not retain Burr as his vice presidential running mate in the election of 1804, the first one held under the new rules.

Having the loser become vice president and remain as part of the winner’s administration created many problems. Chief of these was the fact the vice president’s primary duty was to preside over the Senate and cast the deciding vote on legislation in the event of a tie. This came back to haunt the presidents several times.

Here was the quirk. The Electors met after the general election in the state capitols and cast their votes for president. The candidate with the most votes became President of the United States, the candidate with the second largest number of votes became Vice President of the United States. If there was a tie, the Senate voted on who would become vice president. A tie for president was decided by the House of Representatives.

To illustrate how ridiculous the original concept was let’s look at how some historical election results would have played out if the amendment was never passed. In the cases of presidents who died in office (dio), note the person who would have become president.

You get the idea. History would be very different if the Constitution had not been amended to correct this quirk. The consitutional amendment took the vice president from being a political thorn in the president’s side, to a silent partner (very silent in most cases). Certainly vice presidents could still be embarassing to the administration as we will see in future posts.

They Will Not Grow Old: Memorial Day 2008

This quote is from an article on CNN.com about Section 60 of Arlington National Cemetery which contains the graves of those killed in Afghanistan and Iraq. I truly believe no further words are needed,

“Nino Livaudes was killed in Iraq in April 2003. At his grave is a multicolored, handmade card bearing the message: “You are my hero, Daddy. I am 4 years old, and I miss you and love you very much, Grant.”

In this presidential election year one position becoming crucial to the candidates, is their choice of running mate. For those uninitiated a “running mate” is the party’s nominee for the office of Vice President of the United States. This individual is usually selected by the nominee for President, and then voted on at the convention by the party. This individual, if elected, succeeds to the presidency in the event of removal from office, death, or resignation of the sitting president. Historically the position has been considered unimportant.

No one wants the worst case scenario of losing the elected president, but that possibility is very real based on history. In my opinion much more attention needs to be placed on the selection of the vice presidential candidates. After all it is possible this individual may become president. The vice president is the nation’s insurance policy.

Senator John McCann is the presumptive Republican nominee for president this year. If elected he would be the oldest person to be inaugurated at age 72 years. Today he released his medical records which show he is healthy and his cancer of a few years ago has not reappeared. McCann is extremely qualified to be president based on his years of experience in politics and in the military. Conservatives say he is not conservative enough, Democrats say he is too conservative. He is presently conducting a search for his running mate. He needs to select a much younger person, but one with experience. The candidate will likely be from a large northern state to balance the ticket, McCann is the senator from Arizona, so perhaps someone from Ohio or a similar state. Mitt Romney is in the running because of his support in New England.

On the Democratic side the likely nominee is Barack Obama the junior senator from Illinois. When he choses a running mate that person should be older than him with more experience. Barack has very little experience in foreign affairs, so it is likely someone strong in foreign affairs would be selected. Obama’s selection will likely be white and perhaps from a southern state such as Florida or Texas which he would need to win in the general election.

Whoever the nominees of both parties select needs to be qualified, experienced and able to serve as president. The position of vice president is not unimportant. Eight vice presidents have succeeded to the presidency, seven because of the death of the sitting president, and one on the resignation of the president. There have been several unsuccessful assassination attempts, health issues with presidents, and two attempts to remove presidents from office (impeachments).

In this sheet of stamps issued by the African country of Liberia the Presidents shown are from 1928 until 2000. Some interesting observations on the 14 presidents depicted,

Stay tuned for more postings related to this fascinating position created by the Founding Fathers in the Constitution, and the men who have held it.