Late April and early May saw a roadtrip to San Francisco to attend Westpex 2019 a national level stamp show held yearly. I use these trips to site-see along the way. I’m always looking for historical sites to take in.

Instead of taking a cross-country shortcut I elected to go south almost to Salt Lake City and go to the Golden Spike National Historic site.

The site is located thirty-two miles west of Brigham City, Utah just north of Salt Lake City. The interpretative center stands next to the original rail line and the actual location of the last spike. There are two exact replica locomotives at the site. They are both operational and depending on the time of year do run outs on the line. When not fired up they are in a shed where they can be viewed. Knowledgeable staff are available both in the main center and the locomotive shed.

Jupiter in the locomotive shed. To the left is No. 119

The two locomotives are the Central Pacific’s Jupiter and the Union Pacific’s No. 119. Central Pacific laid track from Sacramento, California through the Sierras to arrive at Promontory. Their locomotive the Jupiter is wood burning as is the replica. Union Pacific had track to Council Bluffs, Iowa but no bridge across the Missouri River so they started laying track from Omaha, Nebraska across the river from Council Bluffs and began building a rail bridge at the same time. Until the bride was completed they barged construction supplies across the river. Their locomotive, No. 119 burned coal as does the replica today.

If you’re interested in railroads and their history I highly recommend a visit. It’s a short drive off the Interstates either I-15 or I-84 depending on which direction you are driving from. Details can be found on the National Park website,

According to the website it is open year round 9 am to 5 pm except for major holidays. Locomotive demonstrations are only during the summer months. Unfortunately I was there in late April but did get to see them up close in their shed. Staff were very knowledgeable and helpful. The gift shop had lots of excellent books and souvenirs. 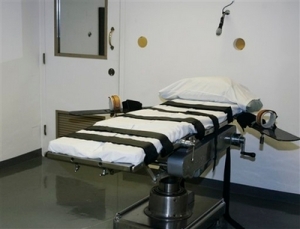 The death sentence is an acceptable punishment in the United States. It is the ultimate sentence that can be given to a criminal. Once a person is convicted and sentenced to die they are sent to death row to await their execution. Because of the appeal process the sentence may not be carried out for many years. There are thousands of prisoners languishing on deathrow in the United States awaiting their time.

The accepted method of execution in most States now is lethal injection. This usually consists of the administration of three drugs given is stages. The prisoner is strapped down on a gurney in the execution chamber and an IV is started. The first drug given is a sedative, then a saline flush is given to clear the lines. Next a drug is given which paralyzes the inmate. Finally the last drug given stops the heart resulting in death within seconds. The execution is deemed completed when a doctor pronounces the inmate dead. All in all I pretty relaxing way to die for these violent offenders who in most cases killed their victims in the most callous and evil ways.

Other methods still exist in some States. These are usually alternative measures which the inmate can select instead of lethal injection. They include the gas chamber, the electric chair, hanging and firing squad.

Electric chair:
Before lethal injection this was the most common method of execution. First used in 1924. The first night 5 men were executed using the chair or “Old Sparky” as it is sometimes referred to. Improper use of the chair resulted in painful death.

Gas chamber:
This was another very common method used in many States. The gas used was hydrogen cyanide. Execution was in a sealed chamber which in some cases could be used to execution two individuals at once. It was expensive because of the maintenance needed to ensure the chamber didn’t leak. Death in the gas chamber was slow and painful.

Firing squad:
Not a common method it is still legal in Utah. It consists of a firing squad of five shooters, four have loaded rounds, and one has a blank round. The shooters don’t know which one has the blank. The inmate is seated and strapped in with a target placed over his heart.

Hanging:
Little has changed with this method since the 1800’s. A noose is placed around the inmate’s neck, he is bound and dropped through a trap door. He drops until the rope snaps his neck. Proper executions using this method rely on an accurate calculation of the prisoner’s weight and length of rope needed. The noose should break the neck resulting in death. Improper calculations resulted in decapitations and injury without death.

Because the death sentence is mandated by the court proper legal and application procedures are always followed. Unfortunately it is likely that innocent prisoners have been executed in the past. Over the last few decades since the advent of DNA testing many prisoners on death row have been exonerated of their crimes. Without this recourse they would have been legally killed.

In the case of a death sentence the prisoner is entitled to all appeals available to him or her. Some States like California have separate penalty phases of trials to determine the appropriateness of the death sentence once the person has been found guilty. The prosecution and the defence both have the opportunity to present evidence and witnesses related to whether the prisoner should receive the death sentence for the crime.