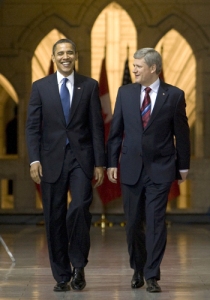 President Obama’s first foreign trip as president took place today when he came to Ottawa, the Canadian capital. No matter your politics the leader of 300 million Americans met the leader of 34 million Canadians for the first time.

Canada and the United States share a 4,000 mile border. The last time hostilities took place across this border was the War of 1812. We are fast friends, allies, and trading partners.

– Canada is fighting in Afghanistan against the Taliban who sheltered Bin Laden and his terrorists.
– Canada took in the many grounded passengers as result of the 9/11 order to ground airliners.
– Canada’s ambassador to Iran helped get Americans out of the country during the revolution.
– Canada and the United States were allies in two World Wars and the Korean conflict.

These are just some of the examples of our friendship and mutual respect.

As countries we have much in common, but like all friendships there will always be some differences. Our countries are both stable and thriving democracies. Best of all we are true friends. As a Canadian with American links I’m proud of the Can/Am relationship.