Even in death Abraham Lincoln didn’t rest in peace, at least until his tomb was completed. After his shooting at Ford’s Theatre in Washington, DC on April 14, 1865 and subsequent death on April 15, 1865 his body was borne by train to Springfield, Illinois where it was interred. The tomb as it is today was completed in 1874.

For years after he was buried in Springfield numerous attempts were made to steal his body. The family kept moving the body around within the crypt to foil the thieves.

The most serious attempt was by a gang of Chicago criminals in 1876. They actually got the coffin out and were attempting to move it when the Secret Service swooped in and arrested them. The coffin was replaced. The motive was to kidnap the body and ask the government for ransom.

Finally Robert Todd Lincoln, Abe’s only surviving child decided to cover the coffin with cement in the crypt to put an end to the foolishness. This was done in 1901. The day of the cement pour Robert Todd Lincoln wasn’t present. The workers decided to open the coffin before encasing it forever. They wanted to make sure Lincoln’s body was actually still there. So they lifted the top half of the coffin exposing Lincoln. According to witnesses he appeared very life-like with very little decomposition having occurred. This was written up in Life Magazine in 1963. A 13 year old boy, Fleetwood Lindley, was the last person to see Lincoln before the coffin lid was closed. He then helped them lower Lincoln into the crypt and the cement was poured. Lindley died February 1, 1963. Three days before he died he was interviewed.

Lincoln, his wife Mary Todd Lincoln and three of their four sons are interred inside the tomb. Robert Todd Lincoln is buried in Arlington National Cemetery.

The Lincoln Tomb receives more than one million visitors each year. The figure is likely to be considerably more in this year, the bicentennial of his birth.

Own a Piece of Lincoln History

If you want an interesting souvenir of Lincoln’s bicentennial just visit your local post office and ask for these stamps.

They were issued February 9, 2009 in four designs depicting various stages of Lincoln’s life. The cost is 42c each. First day of issue was Springfield, IL, but the stamp is now on sale nationwide. 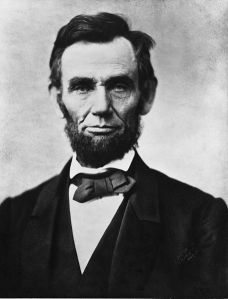 Slavery was not totally abolished by the Emancipation Proclamation issued by Abraham Lincoln on September 22, 1862. The document was effective January 1, 1863. It was a good start to the end of a barbaric practice, but slavery still persisted in the Confederate States of America and some areas of the North.

The Proclamation did pave the way for the eventual total abolition of slavery. Lincoln was not an abolitionist per say, but he saw slavery as the cancer eating away at the Union. He strongly believed in equal rights for all men. He issued the Proclamation at great political risk. Many in his own party didn’t see slavery as a major issue. Certainly the South wasn’t bound by it.

Lincoln believed his powers to end slavery were limited by the Constitution. His strategy for ending slavery was this,

He hoped by shrinking slavery it would become uneconomical and eventually become extinct on its own.

After Lincoln’s death in April 1865, the Thirteenth Amendment was adopted on December 6, 1865 and declared on December 18, 1865. This Constitutional amendment abolished slavery and involuntary indentureship in the United States.

Lincoln was a courageous man and when he believed strongly in something, he pursued it. This trait is what true leadership is built on. 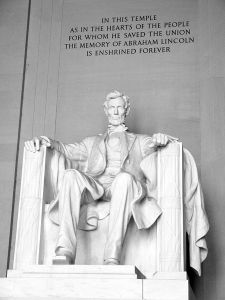 I have visited the capital city of the United States, Washington, D.C. on three occasions. The monument I am most impressed with in the city is the Lincoln Memorial. It also has a most interesting history.

Congress authorized it’s construction on February 9, 1911. It was dedicated on May 30, 1922 by former president and Chief Justice William Howard Taft. The ceremony was attended by Robert Todd Lincoln. He was Lincoln’s only surviving child at the time.

The architect was Henry Bacon, sculptor was Daniel Chester French, with the painter of the interior murals being Jules Guerin.

The scupture of Lincoln seated inside the memorial is the centerpiece. It is 19 feet, 9 inches tall and 19 feet wide. It was carved from 28 blocks of white Georgia marble.

The memorial has been the site of many historical events. Martin Luther King, Jr’s “I Have a Dream” speech was delivered on August 28, 1963 to a crowd of approximately 250,000 people from the steps of the memorial. Today the tile where Dr. King stood is engraved to commemorate the event. The following dedication appears on the wall behind the statue and over Lincoln’s head.

The memorial is depicted on the  reverse of the five dollar bill.  Since 1959 the memorial has been on the penny. That was the centennial of Lincoln’s birth.

Gazing up at Lincoln in that chair, reading his words on the walls, and standing on the steps is awe inspiring. As I stood there looking out over the reflecting pool a shiver came over this history buff.