Fifty years ago today President John Fitzgerald Kennedy was gunned down on the streets of Dallas, Texas. He and his wife Jackie rode in a open-topped Lincoln. Spirits soared as the crowds cheered the young president and his beautiful wife as the presidential motorcade moved through the streets of the city. The morning of November 22, 1963 started out overcast and rainy, but when they arrived in Dallas the sun came out and it was a bright, sunny day.

Kennedy was the youngest man ever elected president at age 43. He exuded energy, hope and new ideas. In October 1962 he saved the world from nuclear holocoust by defusing the Cuban Missile Crisis. He was the first president to speak publicly on the issue of civil rights, and in fact gave a televised speech on the subject, something no American president dared do to that point.

The Cold War between the two superpowers, the U.S.A. and the Soviet Union, dominated the world in 1963. Both countries had enough nuclear warheads and missiles to destroy mankind several times over. After the crisis of 1962 Kennedy and the Soviets had made progress to begin to reduce tensions. The first treaty of any kind related to nuclear weapons, The Nuclear Test Ban Treaty abolishing atmospheric testing of nuclear weapons, was signed by Kennedy and the Soviet leader Nikita Khrushchev. There was hope.

Then the Lincoln entered Dealey Plaza and shots rang out. The president was mortally wounded. Hope died. The world went into shock.

The weekend was spent entranced by television images, the assassination, the capture of a suspect, the body lying in state in Washington, the murder of the suspect, the funeral, and the burial in Arlington National Cemetery. Especially poignant were the images of Jackie and Caroline kneeling at his casket in the Capitol saying their goodbyes, his young son John saluting his father’s casket as it rolled by, and the lighting of the eternal flame at his grave. Even now these images tear at my heart.

It all seemed so surreal. It was unbelievable back then and still is today 50 years later. John Kennedy was only 46 years of age. He had been President of the United States and leader of the Free World for just over a thousand days.

As of today over 150 million people have visited his gravesite in Arlington. Most I am sure like me reflecting on the what-ifs. 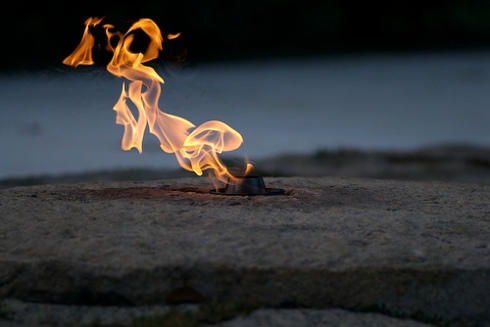 The eternal flame on President Kennedy’s grave in Arlington.

“Near Miss: The Attempted Assassination of JFK” – Smithsonian Documentary

Smithsonian Channel, part of the Smithsonian Museum, just announced they will air a documentary November 17, 2013 on the Kennedy assassination attempt. It is called “Kennedy’s Suicide Bomber” and was produced by Raw Cut TV a UK company. I provided much of the information to one of Raw Cut’s researchers many months ago. This movie is based at least partly on my book referenced in the title of this blog posting.

The problem is they never notified me of the final production and I’m not sure if they will be crediting me with my contribution. I realize that they almost certainly did additional research but I put them on to many of the sources and also furnished them with so-called rare documents related to this. I am presently making contact with both companies to discuss my concerns. Fortunately I documented my research every step of the way. I also documented all my contacts with Raw Cut. Smithsonian and Raw Cut need to make sure I am credited somewhere in this documentary. That’s all I ask.

In any event the show will be great publicity for this “near miss”. Just remember “Near Miss: The Attempted Assassination of JFK” is the only book ever written concerning this and its potential impacts. The book was published in December 2010 and is available at Amazon, Barnes & Noble, Googlebooks, Kobobooks and others. The author is me – Steve B. Davis.

Near Miss – The book by Steve B. Davis

Kennedy Sworn in as President – 50 yrs Ago Today

Kennedy’s inauguration signaled a new generation ascending to power. His predecessor, President Eisenhower was of a previous generation and had served 8 years, since 1954-1961.

Kennedy was also the first person of the Roman Catholic faith to be elected to the office.

The other fascination for people was his young family and his war service. He exuded personality and vigor. New ideas and renewed energy brought hope to young people.

When he was elected it was the height of the Cold War. The United States and the USSR had enough nuclear tipped missiles targeted at each other to destroy the world several times over. This wasn’t just an American or a Soviet issue, but a world living in the shadow of destruction. In fact the official policy of both nations was Mutually Assured Destruction or M.A.D. for short. Simply put if one country attacked the other it was assured both would be destroyed. Sounds crazy, but it was a fact that all of us lived with during that period. No wonder people were looking for new ideas and fresh hope.

Although his presidency was short-lived Kennedy began the dialogue with the Soviet Union on disarmament signing the Test Ban Treaty. This was a first step towards reducing nuclear arsenals.

I remember President Kennedy today for those steps he initiated towards reduction of nuclear tensions.

I can’t let this anniversary pass. On this day in 1960, Senator John F. Kennedy won the Democratic nomination for president at their convention in Los Angeles, California.

Of course, he went on to win the general election in November 1960 by the slimmest of margins to become president-elect. On January 20, 1961 he was sworn in as the 35th president of the United States. He was also the youngest elected president to take office and the first person of the Roman Catholic faith to become president.

Tragically, he became the youngest president (46 years of age) to die in office when he was assassinated on November 22, 1963 while riding in a motorcade through downtown Dallas, Texas.

My entire adult life an eerie fascination has drawn me to the Kennedy Assassination and the events of November 22 – 25, 1963. Over the years I have absorbed everything written on the subject. Now as I wander Dealey Plaza for the first time my brain releases remembrances of that era. I feel at home in a surreal way, not because it is a good place, but rather a familiar one. Memories of the 1960’s and my formative years flood my being.

The first major historical event in my lifetime riveted me at the time and has gripped me since. Historical and political awareness awoke in my young mind over those terrible four days in November 1963.

Forty-six years later like a moth to light, this place attracts me. The Plaza holds no mystery for me. I know every nook and cranny, every conspiracy theory and every person associated with those days.

Dealey Plaza is not an imposing place. It is a small park in the middle of the West End Historic District of downtown Dallas, Texas. The curious come here in a regular flow. They wander, some knowing the tale, others having only read about it. All attempt in some small way to recapture some of the Kennedy mystique.

The story is the saga of youth lost and what might have been. Like all the others I wonder why and lament the potential killed that day. I think in some small way visiting this site is a way to get closure after all these years, to get my mind to accept that yes, it did really happen.

I won’t dwell on this sad story in all the papers and media today, except to say men like him don’t come along very often.

Sure he had faults, most men do, but his public service record speaks for itself. I admire all people like Ted regardless of party affiliation. He stuck by his beliefs, but was still flexible enough to work with the other party to get things done for the common good. In a recent poll GOP members of Congress voted Ted Kennedy one of the best senators to work with on legislation.

I was fortunate enough to actually hear Ted rise and speak in the Senate when I visited Washington, D.C. in 1972. He was most impressive even at that young age.