The inauguration of Barack Obama tomorrow brings back my memories of another young man with high hopes. These high hopes were held by the president-elect and also people in general. 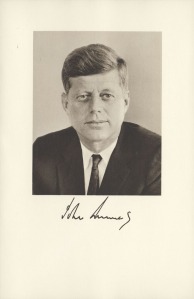 It was January 20, 1961. John F. Kennedy was being sworn in as the 35th President of the United States. He was the youngest person to be elected and the first Roman Catholic to hold the office.

Change was felt by all. Ideals were held high. Realistically those hopes were likely too high, but we didn’t care. The prospect of new ideas and new talent blew like a fresh breeze through our minds. Being only 11 at the time I suppose I was truly naive and overly optimistic. Now tempered by the last 48 years, I am realistic and struggling to be hopeful.

I wish nothing but the best to President Barack Obama in his presidency, but we need to temper our hopes with some realism. The world is a much more complex place in 2009, then it was in 1961.

This entry was posted on Monday, January 19th, 2009 at 10:10 am and is filed under history. You can follow any responses to this entry through the RSS 2.0 feed. You can leave a response, or trackback from your own site.