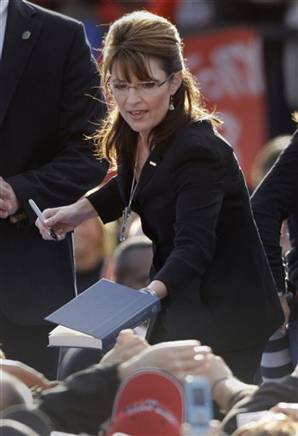 I see the Republican party didn’t like Palin’s hockey mom image. Over the last few months they’ve spent more than $150,000 to make her over. Apparently the clothes (listed as “campaign accessories” in the Republican expenses) are to be donated to charity.

No wonder Palin wanted to be the V-P candidate. Any person male or female would love to have a shopping spree like this one. Substance can’t be bought, so they bought appearance instead.

Fortunately after November 4, 2008, Palin can return to Alaska. I wager that a year from now she will just be a footnote in history.  Palin’s selection as McCain’s running mate will go down as one of his biggest blunders. Not because she is a woman, but for lack of substance.

This entry was posted on Thursday, October 23rd, 2008 at 6:45 am and is filed under presidential election. You can follow any responses to this entry through the RSS 2.0 feed. You can leave a response, or trackback from your own site.