Kathy Casey-Kirschling became the first U.S. baby boomer to collect Social Security on February 13, 2008. She is the vanguard of 80 million other baby boomers in the United States. Canada also has the same large group of these post-WW II babies.

The challenge will be to the health care system and the government pension plans. Will the plans be adequate to look after the needs of this large group of citizens?

Baby boomers have worked hard for the last forty years or more and now are at or nearing retirement age. I am in that group at age 58. In 2009 I will worked full-time for 40 years. I think in all that time I was unemployed involuntarily for about two weeks.

I have a message for the young people of today. Save for your retirement early, even if it is just small amounts to start. The last 40 years have flown by for me, they will for you too. We aren’t here for a long time. To have a good time including in your later years start planning early.

Co-incidently Kathy was born one second after midnight January 1, 1946 and is officially considered the first baby boomer to be born. She retired at age 60 and has been giving back to the community through volunteer work. 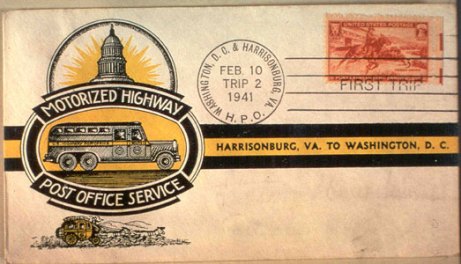 February 10, 1941 the first Highway Post Office service began between Washington, D.C. and Harrisonburg, Virginia. Special buses were used for this service. They were configured to allow clerks to sort the mail in transit. There was a Railway Post Office service, but rail travel was rapidly declining so the Highway service was started to replace that service.

The expansion of the service was delayed by World War II. In 1946 a second route was created. The buses became a common site on American highways during the 1950s and 1960s. Each route served about 25 post offices.

In the 1970s the Post Office Department reorganized and began taking mail to regional sorting plants where it was processed using high-speed machinery. As a result the buses were phased out. The last run took place June 30, 1974. The service had been in existence for 33 years.