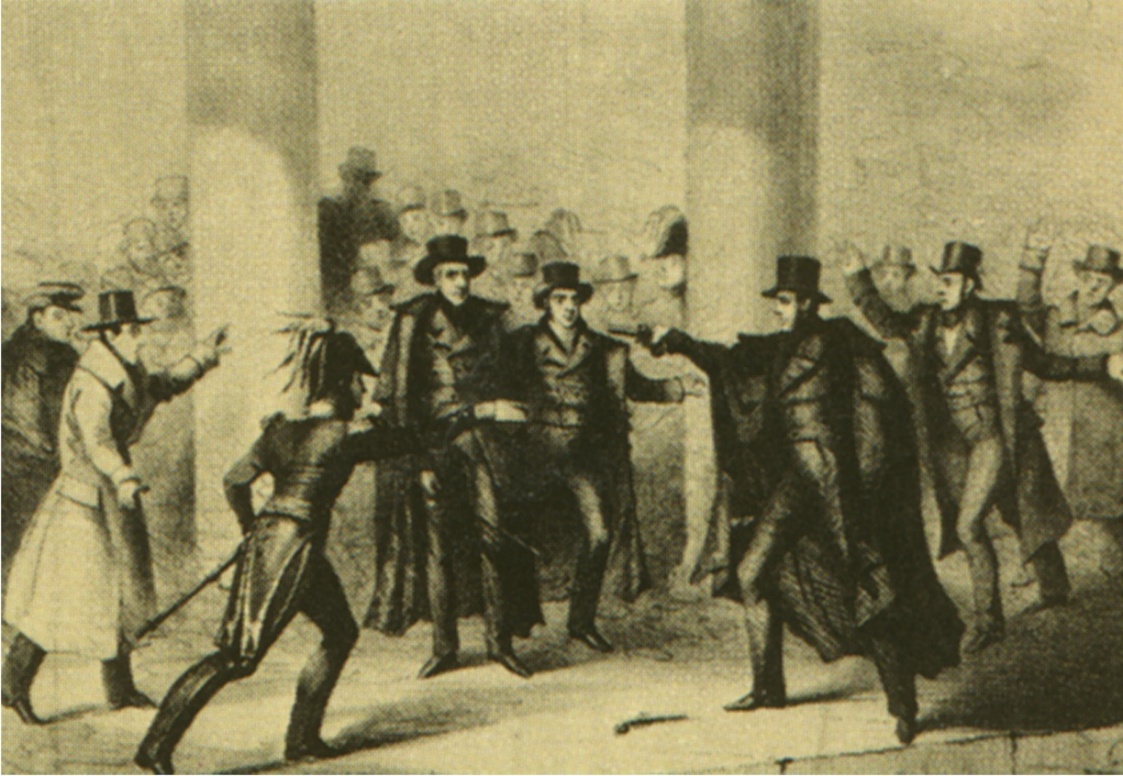 Above: Painting of attempt on Jackson’s life from U.S. National Archives.

On January 30, 1835, the 7th President of the United States, Andrew Jackson, became the first to have an attempt made on his life. Elected in 1828 and serving his first of two terms “Old Hickory” as he was affectionately known, made many enemies for this stand on reform of the banking system and civil service patronage appointments.

Washington, D.C. was experiencing unusually damp winter weather in January 1835. South Caroline representative William R. Davis has just died. The president and most of the cabinet were attending the funeral of Davis which was being held in the Capitol building.

Andrew Jackson at 67 years of age was suffering from respiratory aliments and showing his age. After the service Jackson was walking through the Capitol Rotunda. He and his cabinet walked together through the crowd of spectators. Suddenly a man separated himself from the crowd and approached the president. He got to within three paces of the president, raised a small pistol, and pulled the trigger at virtually point-blank range. There was a loud bang, but nothing happened. The percussion cap had detonated, but the gunpowder failed to ignite. Immediately he pulled a second pistol from his coat, aimed at the president and pulled the trigger, but it too misfired. No harm was done to Jackson.

By this time the crowd had been alerted by the noise of the first misfire that something was wrong. Jackson, outraged that someone was actually trying to harm him, charged the assassin. The president began savagely beating him with his cane. With the assassin now on the ground and Jackson still assailing him, others rushed to assist him. Lawrence was taken away for interrogation.

The would- be assassin was Richard Lawrence, a former house painter. Lawrence had been stalking the President for several days. He had decided that the funeral service with its crowds and distractions would be an ideal opportunity to get close to him.  Lawrence apparently made a move to attack Jackson on his way into the service but couldn’t get close enough to him.

Richard Lawrence had asked the Jackson Administration for a civil service appointment and was denied. He also believed that the United States government owed him a substantial sum of money.  Lawrence told authorities that this money would enable him to assume his rightful place as the King of England. He was enraged because the President would not authorize this payment.  Finally Lawrence was convinced that Jackson had killed his father. These were the reasons for Richard Lawrence’s attempt to assassinate the president.

Lawrence was brought to trial.  During the one-day trial he repeatedly interrupted the proceedings, proclaiming that he was the King of England and Rome.  The jury acquitted him by reason of insanity.  Their deliberation lasted only five minutes. He was held at various hospitals and mental institutions for 26 years until his death in 1861.

There was speculation that Lawrence was part of a conspiracy and even Jackson believed that Lawrence had been hired by his enemies to kill him, but there was never any evidence found to prove this.  After his behavior at trial it was obvious that he had acted alone. 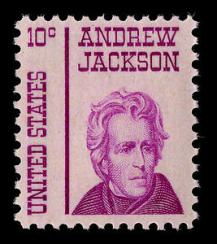 This entry was posted on Wednesday, January 30th, 2008 at 7:33 am and is filed under assassination, crime, history, History & Science, jackson, presidency, presidents, richard lawrence, united states, usa. You can follow any responses to this entry through the RSS 2.0 feed. You can leave a response, or trackback from your own site.